Gerald Everett Jones is the author of nine novels including Clifford’s Spiral, Preacher Finds a Corpse, and Bonfire of the Vanderbilts. today he will discuss his latest novel “Preacher Raises The Dead”. A professional

writer all his working life, is also the host of the GetPublished! Radio and a regular book reviewer on KRLA-AM in Los Angeles. His book reviews have been syndicated by Splash Magazines Worldwide (splashmagazines.com), and he is the top reviewer at Goodreads.com. He studied screenwriting with John Truby and Lew Hunter (UCLA), and his screenplay Christmas Karma was honored by the WGAW Diversity Program in 2016. In 2020 he won six book awards, and then another six in 2021, in the categories Mystery and Literary Fiction, and one in Business. His third novel in his Evan Wycliff series will be Preacher Raises the Dead, which will deal with issues of euthanasia and near-death experiences. To Purchase his books and learn more at geraldeverettjones.com. 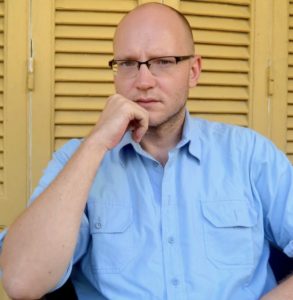 Today, our second guest is Sandor Jaszberenyi, editor in chief of “The Continental”.  Sandor is also a war correspondent who is traveling for this interview to the U.S. from the Ukraine front lines. The aim of The Continental Literary Magazine is to introduce exceptional Central European literature to the American readership. In addition to the English-language writings of the best authors in Central Europe, the quarterly also features the writings of world-famous American writers and literary giants. Sandor Jaszberenyi:  Author of “The Most Beautiful Night of the Soul: More Stories from the Middle East and Beyond” and “The Devil Is a Black Dog: Stories from the Middle East and Beyond.”  Sandor is a celebrated author who received Hungary’s top literary prize.   As a correspondent for European news sites, he has covered conflicts throughout the world, often in the Middle East and his writings have appeared in the Wall Street Journal and The New York Times. To purchase The Continental Literary Magazine https://continentalmagazine.com/