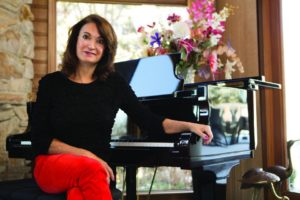 Our guest today is Karen Sokolof Javitch, Composer, Lyricist, she will be discussing her latest song she created titled “Beat the COVID Blues” it’s so appropriate for getting through this difficult period of time during the Covid-19 Pandemic. Karen is a former teacher of visually impaired children and stayed at home with them until they started school. At that point, her background in piano, singing, and dancing led her to an exciting career in songwriting.

Karen is a former teacher of visually impaired children and stayed at home with them until they started school. At that point, her background in piano, singing, and dancing led her to an exciting career in songwriting.

A close friend of Karen’s had written a musical, ‘Love! at the Café!’, but he didn’t know how to compose the 17 songs that he wanted in it.  Since she had a musical background, she asked him if she could try and write them.  Once Karen began, it felt like a faucet turned on in her brain and the songs came pouring out of her and she has not stopped writing since. That was more than 20 years ago.” Now “Love!” is a favorite musical for high-schools. Since she had one musical under her belt, she decided to write a family musical with author Elaine Jabenis and ‘From Generation to Generation’ was born. It was an instant hit in their hometown of Omaha, Nebraska.

Karen greatly admired Princess Diana and was crushed when she died in a tragic car accident. She expressed her grief by sitting down at the piano and writing songs for her.  This later became Princess Diana the Musical.  “I was so saddened by the death of this wonderful woman who gave so much to the world,” Karen lamented. “Writing Princess Diana was my way of trying to keep her memory alive.” Both ‘Diana’ and ‘Generation’ have been produced in many cities around the country.

Karen created two other musicals and more than 15 albums of her music.  Her CD’s are for people of all ages, ranging from children to teens, weddings and even divorce songs, exercising, patriotism, education, celebrities, and many more topics. Karen’s arranger was Mannheim Steamroller’s Chuck Penington, who passed in 2018. She records in Omaha with Grammy-nominated engineer Tom Ware.

Go to Karen’s YouTube Channel and see the more than 100 music videos she has – some have gone viral!  Spotify, iTunes, and CD baby also carry her songs.  Since she started her songwriting career, she has raised more than $350,000 for various charities. For more information go to her website at karenssongs.com/ or visit her Twitter site.