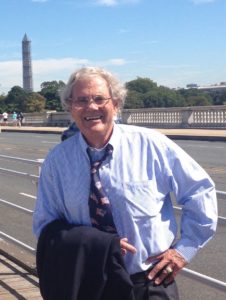 Our guest today Ed Linz grew up on a small farm in northern Kentucky.   He graduated from Covington Latin School and attended Villa Madonna College for two years prior to graduating from the U.S. Naval Academy in 1965.  His subsequent 20-year career in submarines included an assignment as Commanding Officer of a nuclear-powered submarine. His education includes Master’s degrees from Christ Church College, Oxford University in Economics and George Mason University in Secondary Education.  Ed taught high school Physics for 25 years.  He continues to teach Physics to home-schooled students and lectures on the intersection of science and special education.  He also gives presentations on organ donation based on being the benefactor of a life-saving heart transplant in 1994.

They Never Threw Anything Away is his fourth book. His earlier non-fiction works include Life Row, Team Teaching Science, and a novel, Hurtling to the Edge.  His interests include kayaking and  hiking (he recently “made it” to 15,000 feet on Mount Kilimanjaro).  He currently lives in Virginia and Maine.

Ed discusses They Never Threw Anything Away: Memories of the Great Depression by Americans Who Lived It. Then and now from memories of 22 Americans who lived through The Great Depression. In their own words they tell of experiences gained while living during the social and economic chaos of that era. During the late 1990’s author Ed Linz traveled throughout the U.S. gathering stories of lives permanently scarred by the disaster years of the 1930’s. His interviews of a wide array of Americans from varying geographic regions and differing social strata produce an eclectic collection of captivating memories of life during the Great Depression. Ed encourages you to contact him via email at edlinz@edlinz.com, on Facebook, or on Twitter @edlinz65. His columns and book information can be found at www.edlinz.com.