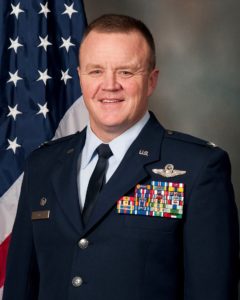 My guest is Colonel Bruce (“Baghdad” )Cox, USAF, Retired and we will be discussing his career in the Service, and now that he is retired what programs and projects he is involved with Veterans groups.  On July 31, 2017, after more than 31 years of service, Col Cox retired from the United States Air Force.  In early 1991, during his first tour flying the F-16, Col Cox was sent to the hostile skies of Iraq, where he flew combat missions in Desert Storm.  It was here he received the call-sign “Baghdad”.