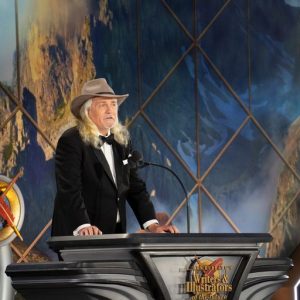 Our guest today is Dean Wesley Smith, “Writers of the Future Judge.”  As a Finalist at the Inaugural Writers of the Future ceremonies in 1985, Dean Wesley Smith was the first person ever to receive a Writers of the Future Award, accepting his framed certificate from judges Dr. Gregory Benford, Roger Zelazny, Robert Silverberg, and Algis Budrys. Smith has published over a hundred novels in forty years and hundreds and hundreds of short stories across many genres. He has over eight million copies of his books in print and has been published in nine countries. He has written many original novels in science fiction, fantasy, mystery, thriller, and romance, as well as books for television, movies, games, and comics. He is also known for writing quality work very quickly and has written many novels as a ghostwriter or under house names. Smith has also written books and comics for all three major comic book companies, Marvel, DC, and Dark Horse. With his wife, he was also co-founder and publisher of Pulp House Publishing (which earned them a World Fantasy Award) before editing for VB Tech Journal, then for Pocket Books. 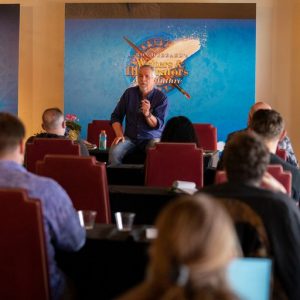 Currently, he produces novels in four major series, including the time travel “Thunder Mountain” novels set in the old west, the galaxy-spanning “Seeders Universe” series, and the urban fantasy “Ghost of a Chance” series, and the superhero series starring Poker Boy. His monthly magazine, Smith’s Monthly, consisting of only his fiction, premiered in October 2013 and has not missed an issue yet, with over 70,000 words per issue, including a new and original novel every month. Dean Wesley Smith became a Writers of the Future Judge in 2010. L. Ron Hubbard’s Writers of the Future Contest is an opportunity for new writers of science fiction and fantasy to have their work judged by some of the masters in the field and discovered by a wide audience. No entry fee is required, and entrants retain all publication rights. Entries in the Writers of the Future   Contest are adjudicated only by professional writers. Prizes of $1000, $750, and $500 are awarded every three months. From the four quarterly 1st Place winners each year, a panel of judges selects one story as the grand prize winner. The writer of the grand prize-winning story receives the L. Ron Hubbard Golden Pen Award and an additional $5000 cash prize. For more information on the contest, go to www.writersofthefuture.com.

“I think this Contest has done more to help new writers achieve their dreams than anything that has come before. I know it gave me a huge push. It’s wonderful to return to be a part of it again as a judge.” —Dean Wesley Smith Find out more at: deanwesleysmith.com.