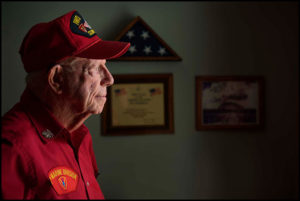 Our guest today is Veteran USMC Don Graves. He tells us his story today as a proud Marine. Donald “Don” Graves, US Marine Corps, has led an unparalleled life, serving his country, his family, and his God to the fullest every step of the way.

He entered the United States Marine Corps at the age of 17 on August 17, 1942, then served two tours in the South Pacific. His 5th Marine Division served with the occupation of Japan. On February 19, 1945, his division hit the beach on Iwo Jima and secured Mount Suribachi in three days, thus the famous flag-raising on Mt. Suribachi. Over the next five weeks of heavy fighting, the island was secured, and he was discharged on January 12, 1946. Since then, Donald has been a singer and performer in Detroit and Hollywood, followed by his calling to Christian ministry as a pastor where he has worked with the federal prison system and gospel rescue missions. As a result of his distinguished military service and far-reaching ministries.

He has a dynamic voice that has led to singing at many military-related events. Locally, he has sung the national anthem twice at Ranger Stadium in front of 40,000 fans, at the opening of a Veterans Day celebration at the Hilton Anatole (see YouTube video), and he has been invited to sing the national anthem at the Armed Forces Bowl at TCU on December 23rd.

It took 4-6 months to form, then to Hilo, Hawaii. No one knew about Iwo Jima. They knew we wanted that island because we could provide air support for our bombers. One day before we got to Iwo they brought a clay model out. Here is Iwo Jima, this is where you are going to go. They went through everything. You’re going to be doing this, you’re going to be doing that. You’re going over the top, turn left, take Suribachi and then you will join the rest of your division going north. That’s what we did.

The Marines made him a flame thrower at Pendleton. Don was the only flame thrower in the Second Battalion that came off. They had 335 Marines going in, only 18 came off. 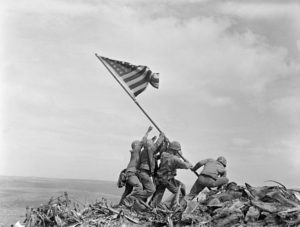