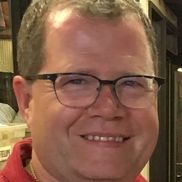 Mark Shaw is the President of Skipkenny BBQ, a producer of Texas BBQ Sauces, Marinades, and Dry Rub located in New Braunfels Texas. Originally educated in the field of engineering and then changing to a career in Occupational Therapy with children, Mark continues to have a passion for creating recipes for Skipkenny BBQ. When not practicing Occupational Therapy, Mark will be found at the BBQ Pit perfecting his skills toward a true Pit Master.

The product line began with his Award-Winning Whiskey BBQ Sauce and has grown to three BBQ sauces, two marinades including a mustard and a Texas BBQ Rub!!
Shaw’s products, Whiskey BBQ Sauce started it all! Their products are produced with the highest quality ingredients as real whiskey and real habanero instead of extracts or flavorings. The sweetness comes from honey and brown sugar which means no corn syrup!!

With three BBQ Sauces, two Marinades, and a Dry Rub under his belt, Mark is moving forward toward new recipes for dry rubs and dressings to grow Skipkenny BBQ product line. For more information or to order go to www.skipkennybbq.com